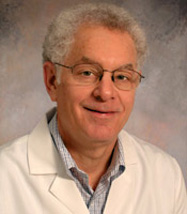 Dr. Joel Schwab was a Professor of Pediatrics. Dr. Schwab graduated from the University of Michigan in 1967 and received his MD degree from New York Medical College in 1971. He completed his pediatric residency at Northwestern University’s Children’s Memorial Hospital and was an Assistant Professor of Pediatrics at Northwestern until 1986 when he came to the University of Chicago. Dr. Schwab maintained a private pediatric practice, the Child Life Center, until 1996. For nine years, Dr. Schwab served as co-director of the Pediatric Clerkship. His outstanding teaching and contributions to humanism in medicine earned him numerous awards and accolades. He was selected as an honoree in the Pritzker School of Medicine’s class composite photograph for nine consecutive years. In 1998 he received the Faculty Teaching Award from the Faculty Dean of Medical Education and was voted Teacher of the Year by Pediatric Residents. In 2002, the Pritzker School of Medicine students nominated him for the American Association of Medical Colleges Humanism in Medicine Award. He also received the Pritzker School of Medicine Outstanding Clinical Teaching Award and the Leonard Tow Humanism in Medicine Award in 2006.

Dr. Schwab’s dedication to medical education spanned the medical career spectrum to include both medical students and undergraduate students. In addition to serving on the Pritzker School of Medicine’s Admissions Committee and Committee on Promotions, for ten years, he was the Faculty Director of the Health Professions Advising Office at the University of Chicago Collegiate Division. And in honor of Dr. Schwab’s contributions to medical education, the Clinical Excellence Track program “On Being a Doctor” has been renamed “The Joel Schwab, M.D. Program On Being a Doctor.”