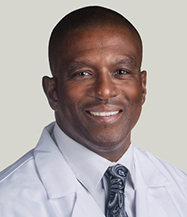 Dr. Wilson currently holds the rank of Colonel in the United States Army and has multiple deployments to Africa, Kuwait, Iraq and Afghanistan. Dr. Wilson is actively involved in both resident and medical student training and has received several teaching awards. Along with being a teacher, Dr. Wilson is an active researcher, and has been widely published on multiple trauma topics including military trauma and trauma surgical outcomes. He is also interested in the association between race and socioeconomic status on trauma-related health outcomes.