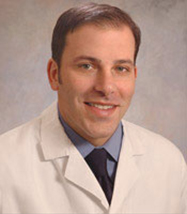 Dr. Roggin is an Associate Professor of Surgery and Program Director for the General Surgery residency program. He is a nationally recognized surgical oncologist who specializes in pancreatic cancer, pancreatic cystic neoplasms, gastric cancer, and retroperitoneal sarcomas. He leads a comprehensive, multidisciplinary research program that focuses on clinical and genomic predictors of outcomes in older patients with pancreatic cancer.

Dr. Roggin is an award-winning surgical educator. He has been inducted into several prestigious societies, including the Gold Humanism Honors Society, Alpha Omega Alpha, and the Academy of Distinguished Medical Educators. In addition, he has received the Leonard Tow Humanism in Medicine award, the Robert Baker Golden Apple award, the Excellence in Teaching Award, and was twice named as “Outstanding Faculty Member” by the medical students. He is actively involved in educational scholarship and is considered a national leader in surgical education. He leads the Training Committee of the Society of Surgical Oncology and oversees the curriculum and ongoing accreditation of the SSO’s fellowships and educational programs. He was elected by the society’s international membership to serve a three-year term on the Executive Council as the Councilor-at-Large.