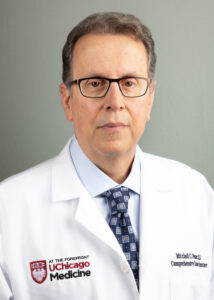 Dr. Mitchell C. Posner’s principle clinical and research interests are focused on the management of upper gastrointestinal cancer, the molecular and genetic basis of gastrointestinal malignancy and oligometastases.  The author of more than 250 original articles, published abstracts and book chapters, he has received numerous awards for his investigative efforts and teaching.  These include the Robert J. Baker Award for Excellence in Teaching at the University of Chicago, and both the Basic Science and Clinical Research Award from the Society of Surgical Oncology.  He served as Chair of the Gastrointestinal Committee of the American College of Surgeons Oncology Group (ACOSOG), the only national surgically focused cooperative group dedicated to clinical trials research.

Dr. Posner serves on the Editorial Board of the Annals of Surgery, Surgery, The Journal of the American College of Surgeons and the American Journal of Surgery. He is Deputy Editor of the Annals of Surgical Oncology. He is Section Editor of Gastrointestinal Diseases for the American Cancer Society journal Cancer. He is a member of many national surgical and oncology organizations including the Society of University Surgeons and the American Surgical Association.  He is a Past President of the Society of Surgical Oncology and past President of the Society of Surgical Oncology Foundation.  He has served as a member of the newly created Surgical Oncology Board of The American Board of Surgery.  In 2002, Dr. Posner was appointed as Professor of Surgery and Cancer Research at the University of Chicago.  In 2004, Dr. Posner was named Chief of the Section of General Surgery, Director of the Surgical Residency Program and Vice-Chairman in the Department of Surgery at the University of Chicago.  In 2007 he was awarded the Thomas D. Jones Professorship, becoming one of only five individuals since 1940 (the first being Lester Dragstedt) to be honored with receiving this endowed chair in surgery at the medical school.  In 2012 he was appointed Professor of Radiation and Cellular Oncology.  In 2015 he was named Physician-in-Chief of the University of Chicago Medicine Comprehensive Cancer Center and in 2020 was appointed as Co-Director of the UCMC Cancer Service line.