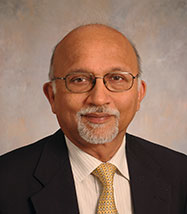 Dr. Vinay Kumar is the Alice Hogge and Arthur Baer Distinguished Service Professor and former Chairman of the department of Pathology at the University of Chicago. He has made seminal contributions in the field of medical education and basic research. In 1974 his laboratory identified Natural Killer (NK) cells as a distinct population of lymphocytes with anti-tumor activities. Continuation of this work has led to discovery of NK cell receptors and the immunotherapeutic use of NK cells. He was elected to the American Association Advancement of Science for this “pioneering work on discovery of NK cells”. He is a passionate medical educator and has influenced medical education across the world for the past 35 years as the editor/author of Robbins Pathology text books. He is the senior editor of these books now in their 9th edition. Robbins Pathology is the most widely used medical text in the world with translations into 13 languages. He has served on the US National Board of medical Examiners as test writer and he recently coauthored a report on competency based education commissioned by AAMC/HHMI. He has played an active role in curricular reforms globally with special interest in his native India. He believes that technology can be a powerful democratizing force in medical education and is developing innovative ways to use technology for educating health science professionals.